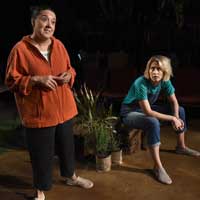 "...It's a clever evening, well directed by Gonda, and exceedingly well-acted by the ensemble. I was impressed by the specific work of Zuker and Elizarraraz, melding into the quality work of everyone else."

"...Imagine if Chekhov had set The Cherry Orchard in 21st-century Mendocino County and you've got Dorothy Fortenberry's Species Native To California, am IAMA Theatre Company World Premiere dramedy that proves that every good story is worth a good retelling."

"...Prompted by Chekhov's The Cherry Orchard, Dorothy Fortenberry's new play, Species Native to California, strikes several notes that may ring - if you're listening - with vibrations from the night outside Atwater Village Theatre, the night of our present darkness. You may hear overtones in two registers."

"...Guided by the skilled hand of director Eli Gonda, the show boasts a strong cast, a tight script, and an absorbing performance. The production, with set design by David Mauer and lighting by Josh Epstein, is configured in the unusual tennis-court style, which places the audience on opposite sides of the playing area. This allows for great flexibility of entrances and exits with a variety of distinct acting areas. Costumes by Melissa Trn reinforce and support time, place, action and character. Sound design by David B. Marling is excellent. The country soundscape that greets the audience when the doors open is pleasing with the subtle sound of bees especially delightful."

On Stage and Screen- Recommended

"...The story is at its best when delving into the complex emotions of a fractured family with longstanding wounds. Zo and Mara don't know why their mother left, and this abandonment has affected them both in different yet similar ways, leaving them lost and untethered, whether clinging desperately to the only place they've ever called home or bouncing around in the world from job to job, relationship to relationship. Act one ends with an unexpected tragedy that produces the piece's strongest scenes in act two as everyone struggles to come to terms with certain change."

"...It's a heady mix of characters, placed in a really fun rustic setting (David Mauer) full of native plants, wrought-iron garden furniture and funky tree stumps to sit on, with a pathetic, desiccated vineyard representing the anemic, untended land. I found myself chuckling constantly at the ridiculous pretentiousness of this gaggle of incompetents who despite their vaunted interest in native species, simply will not listen to the native voices all around them trying to guide them back to solvency."