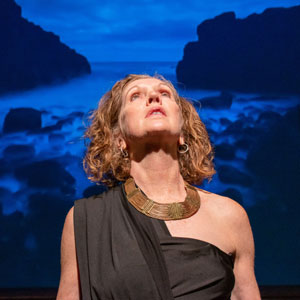 "...Greek mythology's Penelope is known for her legendary, and at times incomprehensible patience. Left by her husband Odysseus who biffs off for a couple of decades first to fight in the Trojan War and then to face innumerable perils on his journey home, Penelope bides her time in Ithaca waiting spaniel-like for his return."

"...Director/choreographer Frederique Michel has done a masterful job with The Penelopiad. Atwoods play is dense and complicated, with multiple story lines and a profusion of characters to orchestrate, but she has more than managed to meet the challenge. Thanks to her strong hand-and the equally robust acting of Peggy Flood (and ensemble) - The Penelopiad stands out as one of City Garages most memorable productions."

"...The way the cast members became ships, became waves, became ghosts, became slaughtered animals, etc. was part of how director Frederique Michel brought a frankly difficult play to life. It proves a wonderful dive into the imagination, rather than some over-extravagant outpouring into live special effects on stage (I'm looking at you Phantom of the Opera as well as a dozen others). When certain things happened on stage in this production, I flinched. Other times I giggled, usually with at least one character. This show despite its scale of wars and worlds, remained intimate not only in terms of the writing but our experience."

"...While I believe that theater at its best should trigger catharsis, the live performance of such an act and subsequent (lack of) aftermath or victims voices leads me to ask: Is this subversive or gratuitous? Is this depiction a message about the cruelty of women to each other within decades of senseless patriarchal war and waiting? If so, does it oust empathy and solidarity for shocking sexual violence, or does it have the effect of spurring the audience to question injustice and double standards?"

"...But Penelope stays true, coming up with ruses to outwit her suitors. She assures them she will choose one after she finishes weaving a burial shroud for her father-in-law. She weaves by day and by night, with the help of her faithful maids, she unravels what she weaved. Odysseus finally returns, disguised as an old beggar, learns of Penelopes faithfulness and dispatches the suitors. He also dispatches Penelopes maids, going by the wrong information given to him by his old nursemaid Eurycleia (Geraldine Fuentes). Even with that gruesome note, the happy couple is finally reunited after 20 years."