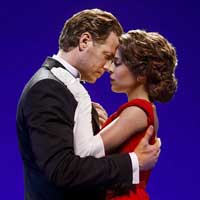 "...Audiences can't help but compare and contrast, especially when the production is jumping through hoops to remind us of what made the original special. That becomes a bigger problem when the show itself fails on its own merits. While remaining faithful to its source material, PRETTY WOMAN lacks all of the fizz that made the film such a sensation."

"...Pretty Woman The Musical has arrived at Hollywoods Dolby Theatre for a three-week run, and if you love the 1990 movie its based on as much as I do, I can pretty much guarantee youll enjoy its Broadway adaptation. Just dont expect the First National Tours leading lady to fill Julia Roberts thigh-high boots."

"...Based off the iconic 1990 romantic comedy film of the same title, Pretty Woman has been transformed into a full-fledged musical. Given the popularity of the film, it makes sense that at some point this colossal property would take it to the musical stage like so many others before it. Now on its U.S. tour, Pretty Woman the Musical, launched in London's West End, has landed in Hollywood. And the question for this reviewer is: Does the world need Pretty Woman: The Musical?"

"...Now to the Dolby comes the touring production of Pretty Woman, a musical adaptation of yet another popular movie that features the opposite: an energeticthough sometimes too energeticcast and some clever visual choices to keep it moving, not to mention a nicely realized 80s-style score by none other than Grammy-winning rocker Bryan Adams with Jim Vallance. Still, what Pretty Woman does not have is a good book."

Its Not About Me- Recommended

"...So, despite its few weaknesses, anything that brings smiles in the middle of these difficult times is okay in my book. While far from being the greatest Broadway musical, Pretty Woman is still one to see. With all the fabulous fashions and portrayals of upscale locations in Los Angeles, the tale pretty much lent itself to becoming a musical."

"...The classic smash hit starring Julia Roberts and Richard Gere about a jaded capitalist who falls in love with a hooker was turned into a musical with a book by the films original director, Garry Marshall (who died in 2016) and screenwriter, J.F. Lawton, and songs by 80s pop star, Bryan Adams and Jim Vallance. Fans of the movie will delight in the faithful adaptation that uses the movie as a blueprint upon which a robust dose of singing and dancing have been injected to deliver a nostalgic guilty pleasure. The witty dialogue? Its there. The red dress? There. The jewelry clap-shut of the jewelry box? There. And then some..."