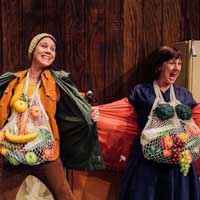 "...While the evening is daffy, delightful and wholly entertaining, some bits work, and some strangely fall flat. The play soars when actors create an inner life that can be physicalized. Ms. Houck is all raw nerves as the kooky neighbor, but, while completely watchable, she has yet to mine the role for comic gold (I wondered what Alice's Beth Howland would have done here). I chalked the disparity up to Turton's direction until farceur extraordinaire Steven M. Porter showed up at Giovanni's door as an inept cop who at one time wanted to be a dancer. As Porter moves about the stage, he pivots his feet and extends his arms in graceful curves even as he tries to catch a thief. It is hilarity cubed. Later, Porter has a scene as an old man who gets tangled up in his walker (!), and it actually made me guffaw. Along with Ms. Hollister, Porter truly gets the art of commedia."

"...Directed by Bob Turton, this production at The Actors' Gang is fun but also way too loud (shouty) and chaotic. I was expecting an evening with far tighter pacing and split-second comic timing from a show about six weeks into its run. The way the cast rattled off the preachy lecture at the end also made me suspect they were a bit embarrassed by the heavy political posturing that concludes the zany action."

"...The Actor's Gang has balls. Originally co- authored by Italian playwrights Dario Fo and Franca Rame in 1974 with current translation by Cam Deaver, Can't Pay? Don't Pay! addresses the effect inflation has on a fed-up, abused and browbeaten working class at the mercy of greedy, powerful, anonymous corporations while being slowly crushed under the weight of capitalism. The Actor's Gang delivers a robust, in-your-face and technically marvelous production, but the story is dated and often feels more like a lecture than a call to action."