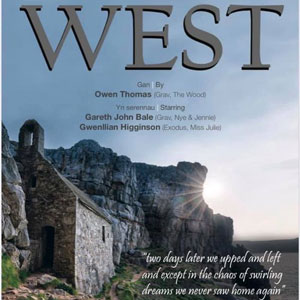 "...West is a Welsh drama which is noteworthy for its glorious use of language and its touching, true story of a marriage. Written by Owen Thomas and starring Gareth John Bale and Gwenllian Higginson, the play, which comes to Hollywood Fringe from a successful U.K. tour, opens in a rural area of Wales, where a shy, young farmer (Bale) falls in love with a local lassie (Higginson). They marry and do their best to survive on the patch of land he inherited from his grandfather. But this proves impossible and, like millions of others in the last part of the 19th century, they decide to emigrate to the USA."