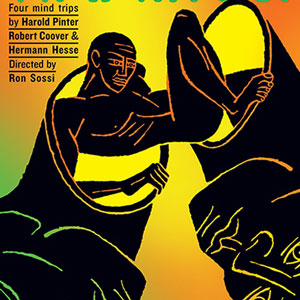 "...From comedy to tragedy, the WAKINGS quartet presents intriguing questions which may foster chuckles or tears. Helmed by skilled director Ron Sossi, WAKINGS seamlessly taps into issues that are profound but yet also everyday  issues which tap into a well spring of queries but which offer no clear cut answers. WAKINGS is a thought provoking production which asks more questions than offers solutions."

"...The Odyssey's current offerning: "Wakings!" is a mixed bag. This spectrum of the writings of Herman Hesse, Robert Coover and Harold Pinter featuring actors I have admired over the years has its ups and down."

"...Some ineffable nuance is missing, where and what I know not (which means this might be a reaction unique to myself--a very real possibility), preventing me from feeling the connection between all four works. I understood such intellectually. I cannot point to many specific problems. Quite the opposite! The individual pieces work fine. Somehow, though, these four did not gel for me personally. Despite the good performances in each of the four."

"...Ranging from humorous to obtuse, this melange of one-acts explores the realms of inner consciousness, reality, and fantasy. Despite director Ron Sossi's adroit staging and his talented ensemble, the results are mixed, mostly due to the static nature of some of the plays."

"...The latest production at Odyssey is Wakings, directed by Artistic Director Ron Sossi. The show consists of four short pieces, written by Robert Coover, Hermann Hesse, and Harold Pinter, that deal with the human mind and consciousness. The pieces are humorous, serious, touching and inspiring."

"...Members of the Odyssey Theatre Ensemble, under artistic director Ron Sossi, present this mostly thought-provoking set of short plays. The most successful comes just after intermission: Pinters A Kind of Alaska, inspired by Oliver Sacks book Awakenings. Deborah (Diana Cignoni), who contracted sleeping sickness 30 years earlier, is awakened by an injection from her doctor, Hornby (Ron Bottitta). Cignoni masterfully portrays a girl/woman who remains stuck at 16 despite being decades older. She is alternately joyous to be awake and horrified to witness aging, both her own and that of her sister Pauline (Ladegaard)."