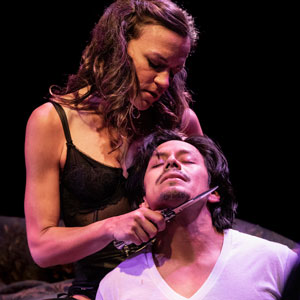 "...irector Evan Isaac Lipkin, performers Sam Bianchini and Roland Ruiz, with an assist from intimacy director Carly Weckstein and lighting designer Matt Richter, are the folks behind a crafty and sometimes squirmy rendering of David Ives's VENUS IN FUR at the Atwater Village Theatre. Ives' darkly comic tale of fantasy gone Faustian won't win any points for subtlety and Lipkin's company members delight in every ounce of the excess. If intimate theater got any more intimate, someone might get arrested for indecency."

"...A sizzling Sam Bianchini ignites the Atwater Village Theatre stage opposite the dynamic Roland Ruiz in David Ives Venus In Fur, as provocative and daring as it is maddeningly cryptic."

"...I suspect direction has something to do with this, given other missteps. For example, Lipkin stages the play with the audience seated on opposite sides of the room. Much of the time the actress's back was to me and I could not see her face.And, for an extended stretch, while the actors were supposedly reading from Thomas's script, they did not touch; instead, they stood face to face while delivering their lines (intimacy choreographer, Carly D. Weckstein). Imagine, for example, if she had been all over him, overwhelming him with the proximity of her sex. How much more dynamic that would have been. Ruiz, to his credit, works relatively successfully against the odds to sustain Thomas' sexuality, though he's largely abandoned in his efforts by the staging."