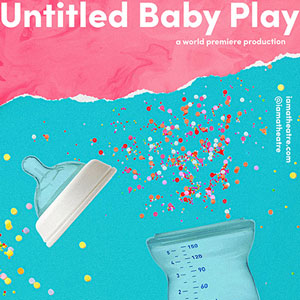 "...Though director Katie Lindsay has done a terrific job eliciting memorable performances from her cast, I can't help wishing she'd been the outside voice to suggest/insist on much needed trims."

"...Nina Braddock's new work, Untitled Baby Play, is a whole pandemic in the making. The play seeks to address the question every reproductively abled person is confronted with: "Are you going to have a baby?" IAMA Theatre Company's world premiere production bravely confronts the subject of whether or not to reproduce, but too often circumvents the nuances of the conversation surrounding the subject of parenthood."

"...The press release for Untitled Baby Play, written by Nina Braddock and now playing by IAMA Theatre Company at Atwater Village Theatre, is a coy title for a blockbuster of a show. Six extraordinary female actors dominate the stage, each with memorable, outstanding performances united around the universal theme of child birth, and all that goes with it, planned or unplanned."

"...The acting is universally excellent and Untitled Baby Play is undeniably a fulfilling theater experience. But as wonderful as these and some other moments are, Act Two feels like a disappointment after the electricity of Act One, and makes it clear that the show is too long. The gaps between high points lengthen. Just past the two-hour mark, the show begins to feel like a work in progress, as does the title. But with some judicious cutting in both acts, Untitled Baby Play could become a seminal look at an important life milestone."