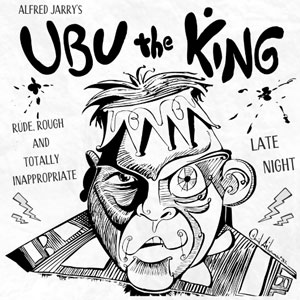 The Actor's Gang at The Ivy Substation

"...Director Tim Robbins brings plenty of clever and effective ideas to play, including a comically oversized sword, a regularly updated body-count chalkboard, a battle represented by MacNure knocking over army men toys, and an impressive array of performer-engendered bathroom noises. He also stages the show with panache, using the large ensemble to create or inhabit various settings, and in one number vividly displays the chaos of a battle scene with strobe lighting and the appropriate musical selection of punk band Fear's "Let's Have a War." I'm not sure if Jarry's play is shocking anymore - we're all very aware that awful people in power will do awful things - but it's still a crude and satisfying kick in the pants to conformity, and that's always a good thing."

"...I didnt quite know what to make of the absurdist Ubu the King when the imaginary curtain rose, but its fanciful lunacy won me over and I ended up quite enjoying this 40th anniversary revival and tribute to one of L.A.s greatest theaters. The show is not for children or staid viewers who prefer their plays to be tried and true formulas, but is right up the alley of more adventurous theatergoers and those who prefer comedies (albeit one wherein the Marx Brothers appear to be on a bad acid trip)."

"...Ubu the King has lost none of its power or punch, offered once again in the guise of delectably scandalous and boisterously unconstrained humor that no one can ace better than these folks, making this one of the most irrepressible and enjoyable evenings out this busy season celebrating the welcome return of signature creativity delivered by our town's ambitious theatre community."