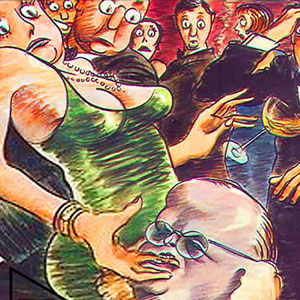 "...Throughout this 70-ish minute Truman show, as the scribe liberally imbibes vodka and swills pills, Capote holds forth with his usual acerbic wit on the bourgeoisie; literature; homosexuality; alcoholism; and his favorite subject: Himself. (Call it "the Truman doctrine.") We learn about the New Orleans-born Truman's rather tortured childhood as a more or less abandoned child, including his stint being raised in Monroeville, Ala., "population 1300," by "three aunts and an unmarried uncle." Tru's unhappy childhood is the source of what Capote calls "this monstrous anxiety of mine.""