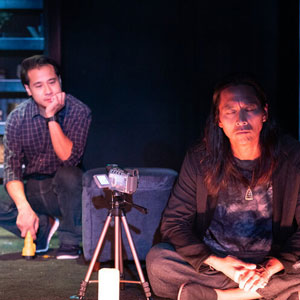 "...When we are not being creeped out by expertly-staged ghostly encounters coming at us from every corner of the stage, Gomolvilas and Liu treat us to interactions between characters who are well-drawn and believable. The warmth shared between Simpkins's Delia and Howard's Felix is as touching as it is palpable."

"...Ghosts, paranormal investigators, and a loving couple that just moved to their new home  it sounds like a reality TV series for binge watching. The Brothers Paranormal at East West Players turns out to be anything but. Instead, audiences are treated to a wonderful, heartfelt, humorous and gut wrenching drama about family, generational trauma and memory. I will not spill the beans on the multiple reveals in the show, but I must assure you that this show is a hit. Drop everything and go now; the limited run closes on December 13, 2022."

"...You dont have to believe in ghosts to succumb to the spell of Prince Gomolvilass entertainingly spooky supernatural thriller The Brothers Paranormal, now getting its long-awaited Los Angeles Premiere at East West Players."

"...Playwright Prince Gomolvilas understands this, and his play The Brothers Paranormal is as affecting as it is spooky. The L.A. premiere of the show at East West Players is superb, and expertly delivers all the scares and surprises that the bigger budgeted and more advertised supernatural production currently at the Ahmanson, 2:22, attempts but cant quite achieve."

"...Still beyond all that, Prince Gomolvilas latest play is a gripping and quite fascinating exploration of the stress and agonies we all experience when dealing with the shock and disenfranchisement of leaving home, of addiction, of self-harm, and especially of caring for someone we love too much to abandon. The Brothers Paranormal does more than scare the begeezus out of its audience; it tackles the more tangible fears and anxieties that invade the lives of so many of us in one way or another."