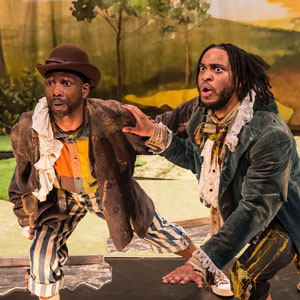 Average Rating based on 7 reviews

"...Tambo & Bones, a new play by Dave Harris that opened Sunday at the Kirk Douglas Theatre, scrutinizes the inescapable legacy of minstrelsy in Black entertainment. At the start of this rambunctious 90-minute production, two Black performers who are well-versed in minstrel shtick are hoping a white audience will be delighted enough by their routines to toss them some quarters. (The racial composition of the audience before which Tambo & Bones is performed naturally changes how this plays out.)"

"...There's a lot going on at the Kirk Douglas Theatre right now. Tambo and Bones begins as a minstrel show and sweeps through the history of race relations in America, a concert, a futuristic genocide, and something or other with robots in the eleventh hour."

"...TAMBO & BONES is a creative foray, partly a flashy show and partly a chance for the audience to let out their emotions. During the opening night performance, the audience certainly gave their full approval as they rose from their seats and gyrated to the rhythms of the music, sometimes with verbal comments, while clapping and urging Tambo and Bones to keep it up and go way over the top."

"...Director Taylor Reynolds doesn't just get exemplary performances from her actors, but also stages the show with unflagging energy and visual creativity. She's helped greatly in this endeavor by Dominique Fawn Hill's extravagantly lush costume design and Amith Chandrashaker & Mextly Couzin's stadium rock concert-level lighting design. Harris's writing is genuinely amusing (a scene in which T&B encounter The Playwright is a hilarious highlight) but an anguished undercurrent flows beneath the tomfoolery that finally bursts through the surface by the end of the play. It's an impressive piece of writing, but the rap songs seem a bit less memorable than the rest of this otherwise ambitious and very enjoyable production."

"...The play is only 90 minutes long (no intermission), so it doesnt take long to establish that quarters arent going to get them very far. They even notice the playwright in the audience, kidnap him like a piñata and pulverize him for all his pesos. But thats not enough: they want dollars not quarters."

"...Kirk Douglas Theater's commitment to bringing us powerful plays that involve social and racial issues continues with the production of playwright Dave Harris' Tambo and Bones. The 90-minute show is nothing if not inventive and immersive, constantly shape-shifting to both unsettle and surprise us."