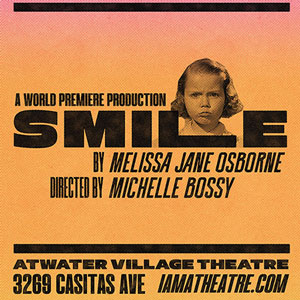 "...A guidance counselor and a 17-year-old student find their lives intertwined to explosive effect in Melissa Jane Osbornes Smile, an IAMA Theatre Company World Premiere as compelling as it is exasperating."

"..."Smile" is a crisp and well presented telling of a story that allows us to eavesdrop on a family that will, in time, heal. The complications of Helen's efforts to help Rachel give us the twist necessary to see the who the strongest character in the play really is."

"...Smile is set in 1992, the historic Year of the Woman when female senators were elected in unprecedented numbers. But aside from some fresh and eye-catching projection design by Sean Cawelti, the time period isnt an integral part of the story. Smile lands somewhere between a feminist piece and a psychological thriller  the most engaging moments are not at all about the inciting misogynistic incident, but rather about the complicated relationship between its two leading women."

"...This is a complex story, yielding its layers slowly. Understudy Alex Fox played Rachel's classmate Joey in the performance reviewed; his character perfectly captured adolescent longing and confusion. The interplay between the two makes up a layer that gives a glimpse into Rachel's future; it will forever be colored by the events in that high school hallway."