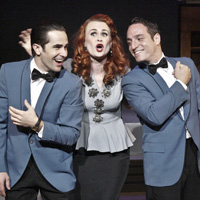 Average Rating based on 12 reviews

"...To move beyond this elegant chamber staging, that and other clashes between form and content - both subject and concept may merit two-act expansion - will have to be addressed. That's best left to archivists, quibblers and future producers, because audiences should be bewitched."

"...The Colony Theatre's latest effort isn't quite there yet: Mark Saltzman's world-premiere musical about the wordsmith half of songwriting duo Rodgers and Hart requires polishing (and a hit would help get the faltering theater back on its feet). But for music lovers and nostalgic theater buffs, this revue directed by Jim Fall offers tender moments, two dozen of the pair's greatest hits and a sobering glimpse at the backstage paradox of Lorenz Hart - snappy wit and lyric genius but a sodden, tormented closet case."

"...The book is the main problem here, and the source of many of the production's inherent problems. Written by Mark Saltzman, the truncated one-act structure unfortunately isn't able to go much deeper than an expose of Hart's homosexuality and binge drinking."

"...The Colony Theatre ends its "Season of Premieres" with a base-clearing home run. Falling For Make Believe combines terrific Broadway song-and-dance with a compelling drama of the life of Broadway lyricist Lorenz Hart."

"...The brief but artistically blessed life of legendary Broadway lyricist Lorenz Hart now serves as the inspiration for Falling For Make Believe, a Colony Theatre World Premiere musical that entertains, elucidates, and ends up this spring's most unexpected treat."

"...The cast is excellent with the ever- talented Brett Ryback playing Rodgers and the handsome Ben Goldberg as Hart. "

"...As stage memoirs go, this one is thin but not entirely unpersuasive, and in its musicality (21 Top 40 hits pulled from the savory songbook) and entertainment value alone, should be a winner for the Colony, which can use one in its heroic battle for financial solvency."

"...Falling for Make Believe rejects "falling for" the usual "make believe" that has permeated such previous dramatizations of the life of lyricist Hart as the 1948 Hollywood movie Words and Music. Mark Saltzman's new musical at the Colony is much more than a revue, masterfully capturing not only the wit and melancholy of Hart's lyrics but also the angst of his closeted, alcoholic adult years."

"...The show offers an appealing blend of timelessly enchanting music with a startling glimpse at the perils of being gay and forging a show business career in pre-liberation decades. However, the colorful milieu of Broadway glamour during the Jazz Age, mixed with the tragic elements of Lorenz' life, occasionally makes for an awkward amalgam of tones. Saltzman and director Jim Fall should pursue ways to more smoothly integrate the dark edges with the ebullient trappings of a peppy musical. Better integration of the myriad narrative threads into a more cohesive progression would also be a plus."

"...This 95-minute gem of a new musical contains some of the best music ever written showcased by the surprising story of the man who wrote the lyrics. It's a compassionate tale simply wrought that doesn't over-sentimentalize its subject but offers a thoughtful look at the price of genius and one poet of Broadway's gift of words."

"...The Colony Theatre in the Burbank Town Center Mall has a winner in this production of FALLING FOR MAKE BELIEVE. It is a welcome addition to Los Angeles theatre and a MUST SEE."