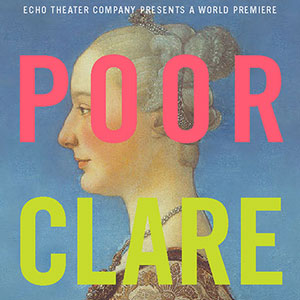 "...Now receiving its world premiere in an Echo Theater Co. production at Atwater Village Theatre, "Poor Clare" offers a drolly modern take on the life of St. Clare of Assisi. Directed by Alana Dietze with the same ensemble finesse that she brought to her Echo production of "The Wolves," the play investigates the sorrows and pleasures of selfless goodness in a world sharply divided into preening haves and pitiful have-nots."

"...Many of the issues facing Clare came to the fore after COVID hit  a period where the rich got richer and the poor got poorer. Is there ever going to be a middle ground? Or will it be, as suggested by a prescient Atik, a revolutionary way of thinking and action about how we consume to change things? Can taking a stand while living with little allow one to be content? Or is just being a good person enough? And if we desire to be a good person, will that alone make us good? Go to Echo Theater and laugh while you think about it."

"...As unexpectedly deep as it is consistently delightful, Poor Clare was in final previews in March of 2020 when live theater took an unplanned hiatus. Fortunately for vaxxed and masked Angelinos, the latest Echo Theater Company gem is at long last reopened for business. Expect to be richly rewarded for the nineteen-month wait."

"...Echo Theatre's World Premiere of POOR CLARE, by Chiara Atik is a strong polemic that focuses on two worlds. The world of the United States today is reflected in an old world call to humility and service, these nine hundred years gone by."

Gia on the Move- Recommended

"...The acting is uniformly good, though there's a whiff of sitcom in the back-and-forth in some of the earlier scenes, likely to fade as the run continues and the performances deepen. In the lead, Hull is a revelation, transforming in the course of the evening from an attractive youthful presence - her Clare when we meet her is a fun-loving person with superficial cares - to a woman of substance. There's a split second when, talking with Francis, she finally grasps his explanation of how the socio-political system of economic injustice self-perpetuates, and in that subtle gem of a moment we glimpse both what the character and the actress portraying her are capable of."