Live At The Purple Lounge Reviews 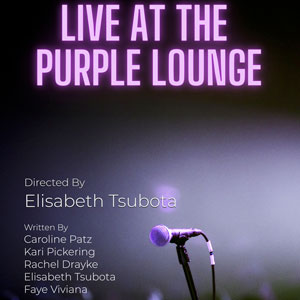 Live At The Purple Lounge

"...LIVE AT THE PURPLE LOUNGE shares the back stories of five comics as they navigate the unpredictable maze that is show business while trying to hold on to the important things in their lives. The show is lovingly and gently helmed by director Elisabeth Tsubota: Whenfirst approachedabout directing a show(I was) riddled with self-doubtI have a habit of approaching unfamiliar things with an attitude of What I lack in skill, Ill make up in enthusiasm! Her enthusiasm proved to be just what the play needed. Derrick McDaniels lighting, Jeffrey Suns sound and graphic design, Nancy Paleys wardrobe, and Mark Iversons set building add immeasurably to the unfolding stories."

"...The actors in LIVE are also students in the Playhouses drama school Square Theater Company and though some of them sometimes show their inexperience-slurring lines, losing projection-they more than make up for it with their youthful energy and drive. The result is a high-spirited, rambunctious production with a great deal of heart."

"...There is something about stand up comedians that defies the logical minds of most of us. How can someone stand on stage, alone, night after night, telling jokes and usually deeply personal stories that may or may not get a laugh from strangers who are normally drunk and often belligerent, in the vain hope that someday someone who can change their lives will be in the audience and they wont have to play dingy, sad clubs with sticky floors and smelly green rooms anymore?"

"...In its world premiere presented by Crimson Square Theatre Company, Live at The Purple Lounge, is a dramedy that takes us inside the worlds of five female stand-up comedians, and all manner of misunderstandings that ensue. Set in the Green Room of the Purple Lounge comedy club, the awkward, funny, tough and truthful moments are all laid out. Although they all share the same profession, the women are at various stages in both their stand-up career as well as their personal lives."