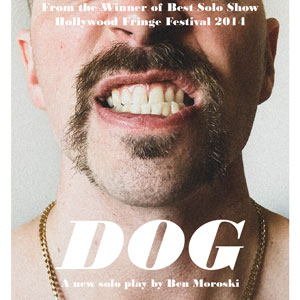 Gia on the Move- Highly Recommended

"...DOG is a searing dark comedy about a man coping with the death of his dog through beer, liquor, and football. It is a heady, gritty, gross, choppy, embarrassing, sickening, appalling deep dive into psychological anatomy. It is also equally exhilarating and extraordinarily beautiful as we watch Dog's downward spiral all the way to the lowest circle of personal hell. None of it is easy."

"...Ben Moroski won a Best of Fringe award in 2012 for The Vicious Minute and a Top of the Fringe award in 2014 for his solo performance of The Wake. This year he's back at The Fringe with his latest solo piece, Dog- a downer of a tale nonetheless presented with the same singular, mesmerizing intensity he brought to his earlier ones."