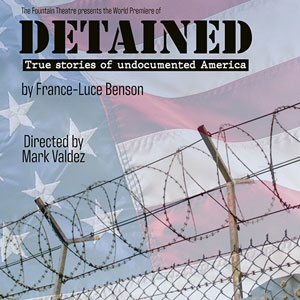 Average Rating based on 10 reviews

"...France-Luce Bensons play, which is having its premiere at the Fountain Theatre, was conceived and co-created by Judy Rabinovitz, whose work as an ACLU immigration attorney inspired the piece. Under the direction of Mark Valdez, Detained moves us from highly partisan debates about immigration policies to the destructive fallout on families and individuals who considered America not just their home but their safe haven."

"...Without a doubt, DETAINED is one of the best productions to come out of the Fountain Theatre this year. For a company known for its treatment of controversial and tough topics, the Fountain Theatre has topped itself with this thought-provoking, incendiary run-down on U.S. immigration policies. This is a not-to-be-missed production."

"...Characters come to life with simple costume changes. The bright orange jumpsuits they are forced to wear are identical to prison garb that felons and true criminals are clothed in. When appearing before a judge, often on video, handcuffed and shackled, the delineation between detainee and a person charged with a crime such as murder blurs."

"...But now, "Detained"-the world-premiere docudrama unveiled at LA's Fountain Theatre this week-focuses a bright light on our almost unimaginably cruel deportation system. We watch as eight shape-shifting actors slip from one real-life role to the next-from the mother of two supporting her family as a high-rise roofer, to a wannabe celebrity chef and an "undesirable" Army combat veteran facing exile, from a pair of ICE officers trying to absorb the harsher set of enforcement orders coming down during the Trump administration, to an immigrant rights attorney turned immigration judge turned, ruefully, Homeland Security enforcer."

"...Detained has been masterfully directed. Working on a simple set (mostly large blocks), the actors have been well-choreographed. Moving sometimes in unison, other times taking center stage for solo speeches, they make a striking sight in their orange prison jump suits. At certain times one of the actors wields a hand-held video camera whose images flash here and there."

"...Honestly I can say The Fountain Theatre is one of those places that never disappoints. Detained, by by France-Luce Benson, conceived and co-created by Judy Rabinovitz, certain delivered with what I would expect. It takes the form of a Reader's Theatre, presented a dramatized lecture/power point about what we as a nation have been doing to those not born here for the past few decades. It makes for a grim awakening."

"...We are helped through the scenarios by the meticulous performance values director Mark Valdez has marshalled to tell the stories. From the sleek scene design by Sarah Krainin, to the innovative video designed by Matt Soson, every element coalesces into a smooth, almost magazine style of presentation."

"...Detained is yet another triumph in that long line of work, examining the economic, social, and psychological effects of detentions on families in a kaleidoscopic compilation of true stories of "complicated grief" and "ambiguous loss" that will mark, especially the children, for life. The ensemble production was written by 2021 Lorraine Hansberry Award-winning playwright France-Luce Benson, and directed by Mark Valdez, winner of the 2021 Zelda Fichandler Award."

"...Immigration attorney Judy Rabinovitz of the ACLU Immigrants' Rights Project commissioned Detained. Haitian-American playwright France-Luce Benson wrote the script and Los Angeles theater fixture Mark Valdez directed. The play grew out of interviews with long-time U.S. residents held in immigration detention, and with their family members, advocates and attorneys, as well as ICE representatives. An indictment of U.S. immigration policy and a cry for change, Detained gives voice to the voiceless and, true to its goal, inspires action."