Both And (a play about laughing while black) Reviews 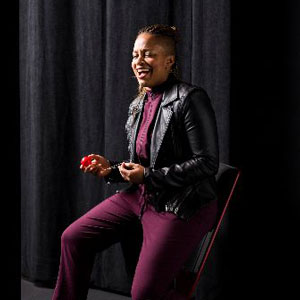 Both And (a play about laughing while black)

"...Some of these issues are underscored by technical aspects of the production. A decision to open up the proscenium to its max has the effect of making the performer look smaller and a bit lost. This makes sense from the vantage point of woman-against-the-universe, but it's less helpful in scenes where Teayanna speaks intimately to the audience, as she does multiple times. Shannon Barondeau's videography near the top provides colorful illustration of the multiplicity of people and cultures which feature a clown of their own; we could have used more visuals later on to elaborate on the netherworld, now communicated by Andrew Schmedake's lighting and David B. Marling's rustling sound. Ed Haynes spare scenic design is best noted for the inclusion of prop person Kevin Williams' super large size replica of a Black mama's purse."