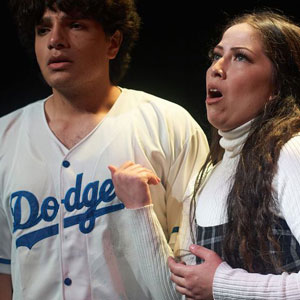 "...A young gay Latino exits the closet to a 90s dance club beat in Abel Alvarados ARENA: A House MUSIC-al, a heartfelt but overpopulated coming-of-age story that works best when the spotlight is on Alvarado stand-in Lucio, particularly as brought to engaging, charismatic life by newcomer Preston Gonzalez Valle."

"...Playwright Abel Alvarado mined his own 1990s Arena experiences, conceiving a sprawling and slam-bang musical tribute to the venue and the era that defined it. His formulaic but love-filled tale of self-discovery is abetted with music by Benjamin Emory Larson, lyrics by musical director Gabrielle Maldonado, and additional songs by Daniel Sugimoto. The show boasts around thirty tunes - though they are only listed in the press material - and run from the forgettable to the enthralling. However, the ensemble has the vocal chops to bolster even the shakiest of the songs. Meld that with Tania Possick's energetic choreography, Marco de Leon's shimmering multi-level set, and Alejandro Parra's hypnotic strobe lighting and it is like one is back in the Oz-like Arena scene. Get ready for a thumpy ride."