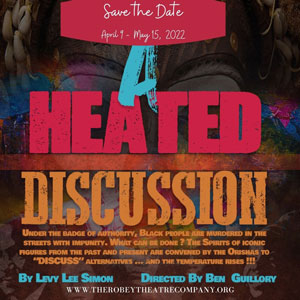 The Robey Theatre Company at The Los Angeles Theatre Center

"...A HEATED DISCUSSION is a powerful piece of theater  creative, engrossing, and thought-provoking. Given the large cast, director Guillory does a yeomans job of herding the cats into one barrel while making sure that each individual maintains his own personality and emotional center. Happily, he is ably assisted by a very talented acting crew who skillfully draw both laughter and tears from the audience. The audiences periodical claps during the show which was reviewed revealed just how much the viewers were emotionally involved in the performances. The show will especially appeal to anyone interested in the history of the black movement  or even in history more generally."

"...The Robey Theatre Company has elevated the voices of people-of-color for almost 30 years. Their co-founders, Ben Guillory (Artistic Director) and Danny Glover, have responded to the history and the everyday lives of BIPOC Americans with powerful works on the stage. When going to see a play titled A Heated Discussion, this is what their audience can expect to see. When there is no veil of fictional narrative, they can expect their own experience to play part in the discussion."