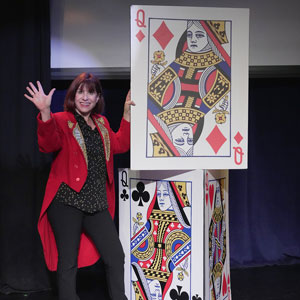 "...As the title suggests, prestidigitation factors heavily into ESCAPE, but it's by no means the performance's only draw. Carter is also a comedian, author, motivational speaker and a woman with a compelling personal story to tell. Directed by Lee Costello from a script by Carter, the 90-minute three-hander showcases Judy Carter as a talented performer and a deeply conflicted person who has navigated some bumpy terrain in her life. Not too shabby for a lady who was ousted from the Magic Castle because she was informed that "cards are for men.""

"...The intimacy of the little space at the Hudson Guild is perfect for this presentation. Judy and her crew have put the money on the stage with video projections and effects that will not be mistaken for Penn and Teller, but meeting Marsha and Judy's mother and grandmother. .even her dad .. will touch your heart because Judy Carter's heart is totally on her sleeve."

"...Judy Carters compelling autobiographical play is a well-integrated combination of magic, comedy and poignancy. The show is particularly impressive for having a number of effects in a very small space. The escape of the title is an escape from what was painful in her past. Her stand-up style of humor serves as comic relief from a story that cant fail to touch audiences because it contains so much genuine anguish. Carter, who wrote the script, narrates and re-enacts pivotal incidents from her life with the help of two other actors playing multiple roles."

"...Judy Carters new comedy, A Death-Defying Escape, now playing at the Hudson Guild Theatre, demands a plethora of superlativesamazing, brilliant, achingly funny, powerfully tragic, with eye-popping magic tricks oh, I could go on! Ms. Carter engages the audience with the very personal story of her life as a child growing up as a Jewish girl in the Fairfax neighborhood of Los Angeles."

"...Having a family member with cerebral palsy or some other demanding condition puts tremendous stress on parents and siblings alike. What Carter's play does not touch on is whether or not there were any publicly funded programs that would have enabled Marsha to remain at home with her family and still receive optimum care while removing some of that burden off the family. Was institutionalization the only alternative, and a cruel one at that? And yet apparently, Marsha was eventually able to find a loving home to be adopted into for her remaining years. No wonder issues of ability and disability figure so prominently into contemporary demands as we imagine a more just society. The solutions cannot be left to the anarchy of individual struggling families."